Minimalistic and anonymous voting protocol on top of Bitcoin Cash. Participating, verifying and tallying does not require a full node, but is fully SPV client compatible.

Enable creation of an election system that:

This video goes through what traceable ring signatures are and how they can be used for voting in an election on Bitcoin Cash. 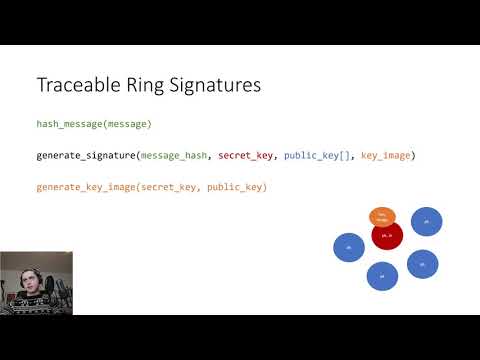 To hold a vote the following setup steps are taken:

The only information exchanged off-chain is the proposal details. The remaining participation happens on the blockchain.

To cast a vote the following steps are taken:

After the vote ends, each participant queries the blockchain to tally the vote result independently. Votes can also be tallied during the vote for a partial result.

To create a election, the following data is needed:

The Election ID consist of a hash of all the data belonging to a vote.

Each participants MUST know of all the data belonging to a vote. Without this, they cannot participate. Hashing this data into the Election ID allows each participant to verify that they have received it.

The Election ID is generated as follows:

The first input of a casting transaction contains the vote payload.

Any output of the casting transaction is a vote cast notification output.

The payload is published on the blockchain using the Transaction Input Payload Contract.

The vote payload size is:

The Transaction Input Payload Contract supports payloads up to 1503 bytes. This effectively limits elections to 22 participants. To support more participants, we'll need a more efficient signature scheme or a different method to publish the payload on-chain.

Table of participants vs. payload size:

All participants agree on a vote cast notification output. This output is unique to the election. Its purpose is to be an address all participants can observe to detect votes.

The output is to a P2SH script and defined as follows:

This redeem script is a anyone can spend contract. Anyone who knows the Election ID can spent these coins, allowing the utxos created to be removed from the blockchain. The contract checks that a single input equals to the Election ID.

To tally up the vote, every transactions sending coins the the notification address is downloaded. Then the transaction is inspected to see if it contains a vote payload.

Thanks to the following for review and their valuable suggestions for improvements: