"Multi option vote" is a minimalistic and transparent voting protocol on top of Bitcoin Cash and other blockchains supporting OP_CHECKDATASIGVERIFY. Participating, verifying and tallying does not require a full node, but is fully SPV client compatible. Votes are non-transferable.

Enable creation of an election system that:

The system is arguably more susceptible to coerced voting as a dishonest voter cannot plausibly claim to have voted differently than he did.

An organization's chairman needs to get an expense approved by majority vote of the organizations members.

Each member has a voting-enabled Bitcoin wallet on their phone. They receive a push notification that a new vote is available to them along with the data needed to participate. No more interaction is needed with the chairman. The remaining communication happens on the blockchain.

With the wallets, each member is able to cast their vote to the blockchain.

Each participant is able to observe all other votes cast in real time by observing the blockchain.

When the vote ends, each participant is able to tally the vote and determine the result by themselves.

To hold a vote the following steps are taken:

To create a proposal, the following data is needed:

Providing the proposal details to voters in full or compressed has trade-offs in how much trust is needed of voters to thid parties.

Notably, providing election details in full requires no trust and no further communication is required for the voter to participate or follow the election. He only needs to interact with the public block chain.

It is recommended to make both compact of full details available to a voter and let them decide on this tade-off between resource usage and trust.

A voter with full election details

A voter with full election details can cast a vote without third party interaction, submitting it directly to a public blockchain.

A voter with full election details is able to individually tally the entire election. Votes can also be tallied during the vote for a partial result. The voter is also able to take the role as a third-party tallier for other voters, including providing cryptographic proofs of their tally being correct.

The same data is needed for every participant to participate and tally the election. A voter with full data is able to provide it to other voters, giving them the same benifits. He can also create compact election details to other voters, including a compact merkle proof that they are part of the list of participants.

A voter with compact election details

(number of participants * 33 bytes) - 32 bytes. For elections with 100 000 participants, this equals to 3.3 MB of storage savings. In this case participation requires data of typically less than 1KB, rather than 3.3MB. Additionally, the voter does not have to compute the merkle root hash themselves, saving processing power.

When provided compressed election details, the voter needs a third party (that has the full details) to tally the election to get the results. However this tallyer provides cryptographic proofs that a voters vote was tallied or not tallied. They can also proof that accumulative vote count matches the number of ballots counted. If a tallier refuses to provide proofs, then the voter knows he cannot trust the result.

The Election ID consist of a hash derived of all the data belonging to a vote.

The Election ID is generated as follows:

Participant Merkle Tree is a type of merkle tree of all participants with the following properties: 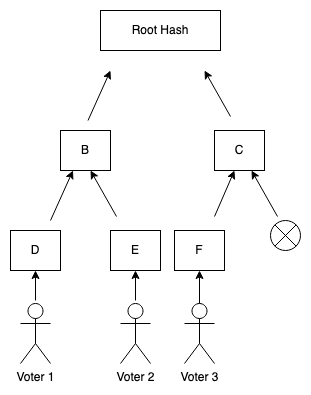 With a merkle tree with these properties, it is possible to generate merkle proofs proving:

The redeem script used to spend from the address also forces the user to cast a vote. User needs to cast a vote with a valid option, or it will be ignored.

If there are multiple spends at the same height, the one with the lowest transaction ID used.

All votes confirmed before begin height are ignored.

All votes confirmed after end height are ignored.

Each voter has a unique contract address for casting a vote. This uniqueness comes from the users public key hash and the election identifier being part of the redeemscript.

The derive the address for each user, derive their redeem script and generate a standard P2SH locking script and address from it.

To tally up the vote, the contract address for every participant is derived.

A vote can be held without a voter in the participant list being given enough information to cast a vote.

This is mitigated by having all other participants needing the same information to participate. Any other honest participant is able to share this information.

Future research may be done on enforcing publication of proposal details on the blockchain before a proposal can be voted on.

When casting a vote with the two-option-vote contract, the vote option passed as input is validated in two ways.

This ensures that any vote cast must be a valid one.

We relax the input validation, by technically allowing votes that are invalid to the election to be cast. Votes are then validatied during tallying and ignored if invalid.

When this is done, the contract becomes more flexible and allows for holding elections with any number of votes. The trade-off is that now the vote option cast is no longer validated on the blockchain and must instead be validated in the clients of the users who tally the election.